VIEW OF MELBOURNE FROM THE NORTH

In Australian cities, the aim should be to maximise development along new and future road public transport corridors. 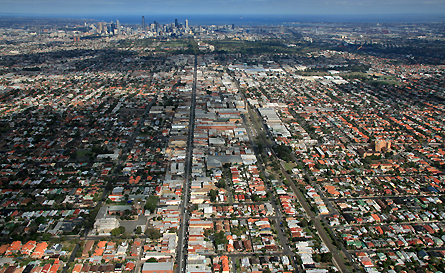 AN EXAMPLE OF CURRENT UTILISATION…

A possible future for Nicholson Street (looking south towards the city), shown as current utilisation. 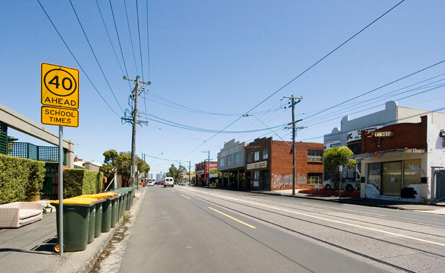 …AN EXAMPLE OF AN IMAGINED FUTURE

Streets will be modified to favour rapid public transport, bicycles and pedestrians over motor vehicles. 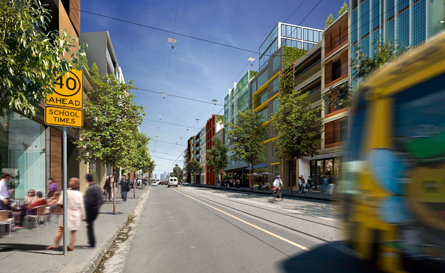 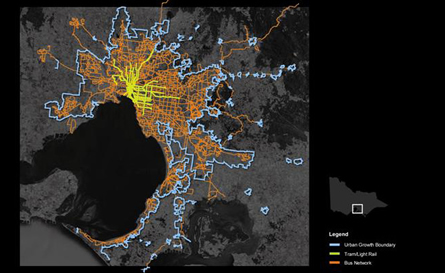 Transforming Australian Cities (TAC) was initially commissioned by the Victorian Department of Transport and the City of Melbourne to establish the potential to transform metropolitan Melbourne to meet the projected population of 8 million by 2050. The study specifically does not deal with rail based public transport and Activity Centres as these have been the subject of extensive investigation over the last ten years. Known capacity figures for Activity Centres and some redevelopment sites have been referenced to allow a more comprehensive understanding of existing capacity with the current Melbourne Metropolitan Boundaries.

This study looks at the potential yield that could accrue through good urban design of the urban corridors/strategic sites. A number of assumptions, as illustrated below, were made in determining the potential for future development along these tram and bus corridors.

Melbourne, a city of 4 million, in 2009 has seen a 40% increase in the demand for housing at a time when, as a result of the Global Financial Crisis, house starts have declined by 3%. The enormity of the challenge of building the equivalent city and infrastructure that has taken 175 years in under 40 years is daunting. Add to this the fact that cities today are directly or indirectly responsible for over seventy five percent of the world’s Green House Gases and we are starting to realise that our cities, as in the Industrial Revolution, are slowly ‘choking us to death’.

The challenge for our generation is the need to not only build the equivalent capacity of existing
cities, that have taken centuries to develop, but to do this in only 40 years and in a socially
successful model while at the same time transforming our existing cities to a low carbon future. 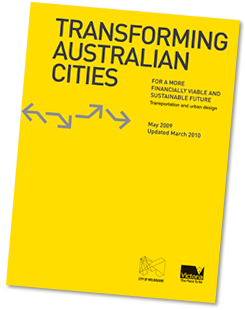 This study looks at the potential yield that could accrue from this approach to intensification of the urban corridors. A number of assumptions, were made in determining the potential for future development along these tram and bus corridors. The secret is to recognise the need to transform our existing infrastructure rather than building and expanding in the hope that increased size will improve our capacity.